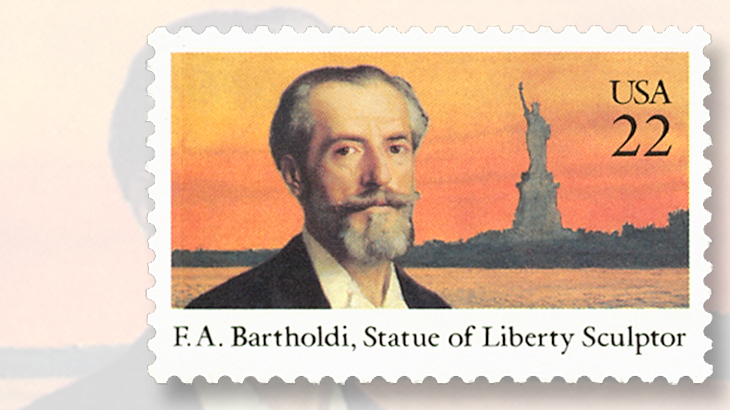 Statue of Liberty sculptor F.A. Bartholdi was honored on a 22¢ stamp issued in 1985.

Frederic Auguste Bartholdi, the French sculptor who created the Statue of Liberty, was born in Colmar, France, on Aug. 2, 1834.

After studying architecture and art in Paris, Bartholdi began a career as a sculptor of patriotic monuments before serving in the Franco-Prussian War in 1870-71.

Soon after the war he traveled to the United States to pursue a plan for a statue to be presented by France as a gift to the American people that would symbolize the friendship between France and the United States. He was active in raising funds for the project, and worked with Gustave Eiffel and others to make the statue a reality.

The statue was dedicated in New York Harbor in 1886, and Bartholdi participated in the unveiling, presided over by President Grover Cleveland.

Among Bartholdi’s many other artistic creations are the statue of the Marquis de Lafayette in New York City, and the Lion of Belfort, a red sandstone sculpture 11 meters high in northeastern France.

The Statue of Liberty appears on many different stamps issued by the United States, France and other countries. Bartholdi and the statue are honored together on a 22¢ U.S. stamp issued July 18, 1985 (Scott 2147).