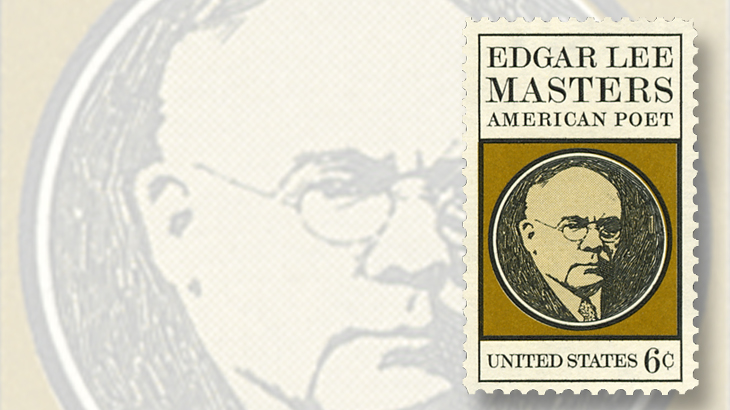 American poet Edgar Lee Masters was commemorated on a 6¢ stamp in 1970.

Masters was born Aug. 23, 1869, in Garnett, Kans., and grew up in Petersburg and in Lewiston, Ill., not far from the Spoon River, which gave its name to the fictional town in Masters’ 1915 poetry collection, Spoon River Anthology.

Masters worked as an attorney for many years, including time in a partnership with Clarence Darrow, while also publishing poetry and plays using a pen name. Spoon River Anthology, an early collection and his most famous work, was described by Ronald Primeau as “a series of poignant and often sardonic graveside monologues that capture small-town America, Midwestern values, and the angst of modern life.”

When it was published, the book found a substantial audience of admirers, but it was spurned by others for its free verse format and the frank and revealing accounts of its subjects’ lives.

Masters later published additional poetry, fiction and plays, as well as biographies of Abraham Lincoln, Mark Twain and others.