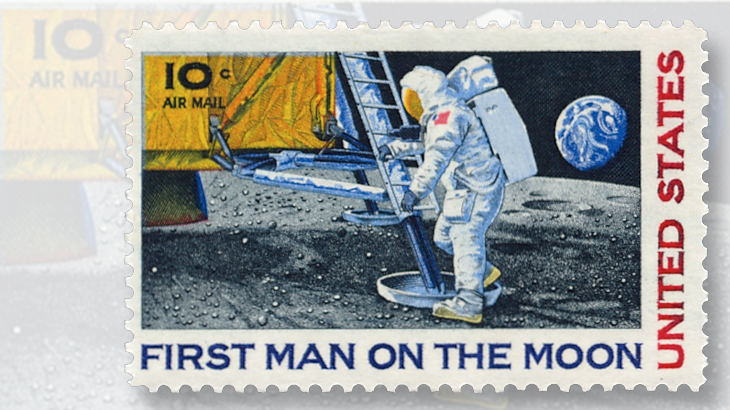 No other person has been honored on more United States stamps during his lifetime than Neil Armstrong.

Despite the fact that its stamp subject guidelines at the time prohibited honoring any individual until 10 years after his death, the U.S. Postal Service issued four different stamps that depict Armstrong on his final space mission, and another that shows the footprint of an astronaut on the moon’s surface and names Armstrong in text printed on the stamp’s reverse.

Armstrong, the Apollo 11 spacecraft commander who in 1969 became the first man to step onto the moon’s surface, died at age 82 on Aug. 25, 2012, following complications resulting from cardiovascular procedures.

“As a research pilot at NASA’s Flight Research Center, Edwards, Calif., he was a project pilot on many pioneering high speed aircraft, including the well known, 4000-mph X-15,” NASA reports.

Armstrong joined NASA’s astronaut program in 1962 and was named command pilot of the Gemini 8 mission, which would launch on March 16, 1966.

Simply because of Armstrong’s place in history as the first man on the moon, his role in the historic Gemini 8 mission is less well known. Armstrong and pilot David R. Scott were the first astronauts to successfully dock two vehicles in space, connecting their craft with a Gemini Agena target vehicle launched the same day.

But 27 minutes after the link-up, the spacecraft began to roll dizzyingly through space because of a thruster malfunction in the manned Gemini capsule. The emergency caused the mission to be cut short as the astronauts disengaged their craft from the target vehicle, stabilized it by engaging the re-entry control system, and splashed down just 10 hours after the flight began.

Three years would pass before Armstrong’s next and final mission in space, but it was the mission that would forever etch his name in the annals of history and place him among the top of the world’s most admired pioneering heroes.

As mission commander of Apollo 11, Armstrong would become the first man to set foot on the moon. Lunar Module Pilot Edwin “Buzz” Aldrin would follow him onto the moon’s surface about 20 minutes later as pilot Michael Collins orbited overhead in the command module, Columbia.

The mission launched July 16, 1969, and the lunar module Eagle landed on the moon in the Sea of Tranquility on July 20.

Prior to the landing, U.S. Postmaster General Winton M. Blount announced that the Post Office Department would issue a 10¢ First Man on the Moon commemorative airmail postage stamp, the design of which was revealed on page 1 of the July 21, 1969, Linn’s Stamp News. The engraved master stamp die for the stamp was part of the cargo on the Apollo 11 flight, and Armstrong and Aldrin would hand-cancel a “moon letter” during the mission.

The 10¢ stamp (Scott C76) was placed on sale in post offices on Sept. 9, 1969, less than eight weeks after the Apollo 11 mission successfully concluded.