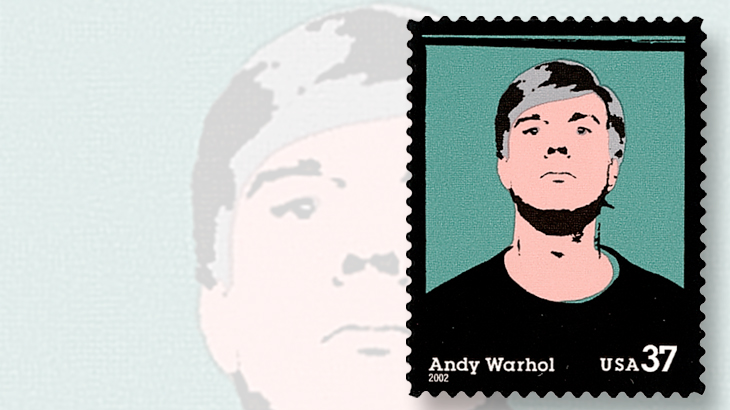 American artist Andy Warhol (born Andrew Warhola) was born Aug. 6, 1928, in Pittsburgh, Pa., the son of Slovakian immigrants. Warhol studied commercial art at Carnegie Institute of Technology and was art director of the student art magazine. He graduated in 1949 with a degree in pictorial design.

Warhol became a successful commercial artist, contributing to magazines in New York City. His paintings focused on common commercial subjects and bold portraits, and he explored and expanded upon the use of silkscreening in fine art.

The United States Postal Service described Warhol as “a leading figure in the pop art movement and one of the most influential artists of his time.”

“Warhol's serial images of celebrities, such as Marilyn Monroe, and everyday objects, such as Campbell's soup cans, are perhaps his best known works,” the Postal Service noted when the 37¢ stamp honoring him was issued Aug. 9, 2002 (Scott 3652). “Warhol's paintings achieved instant notoriety in 1962 with the solo exhibition of the now famous Campbell's Soup Cans paintings at the Ferus Gallery in Los Angeles. His influence continues in art and film, as well as in a wide range of other creative endeavors throughout contemporary popular culture.”

Warhol’s Self-Portrait, 1964, is featured as the stamp illustration.