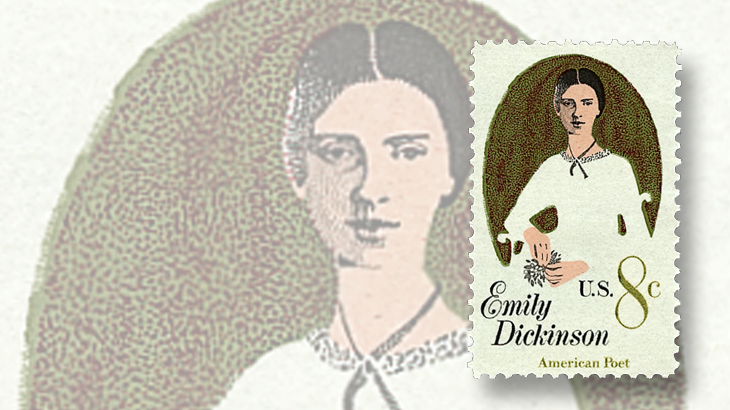 One of America’s most famous 19th-century poets, Emily Elizabeth Dickinson, was born Dec. 10, 1830, in Amherst, Mass.

Her mother’s name was also Emily, and her father was Amherst College treasurer Edward Dickinson, who would later serve in the United States Congress.

Emily Dickinson had an older brother, Austin, and a younger sister, Lavinia.

Dickinson lived in Amherst for almost all of her 55 years. She attended Amherst Academy from age nine until she was 16, when she began her studies at Mount Holyoke Female Seminary in South Hadley, about 10 miles away. She left the school after less than a year and returned home for good.

During her 20s, Dickinson rarely strayed from her home, though she did venture out with her family on occasion. When her mother took ill in the 1850s, Dickinson remained at home more and more; unknown to but a few, she was engaged in writing poems that would eventually number almost 1,800.

She was also a prolific letter writer, but she sent only a few of her verses out for consideration by editors, and shared some with her closest friends. A very small number were published, anonymously.

Over the years she remained in seclusion and struggled with the deaths of mentors, friends and family members, including her father, who died in 1874.

Dickinson eventually arranged her poems into 40 handwritten and sewn-together volumes frequently referred to as her fascicles.

Her health declined as she entered her 50s, and she died, presumably of heart failure or kidney disease, on May 15, 1886. After her death, the trove of poetry was discovered and eventually published, initially in various volumes and editions of selected poems, and then in a complete gathered set in 1955.

An 8¢ commemorative stamp honoring Emily Dickinson was issued Aug. 28, 1971 (Scott 1436), with a portrait based upon what was at the time the only verified photograph of Dickinson, which was taken when she was 17. One other photograph surfaced just a few years ago that appears to show the poet approaching age 30.