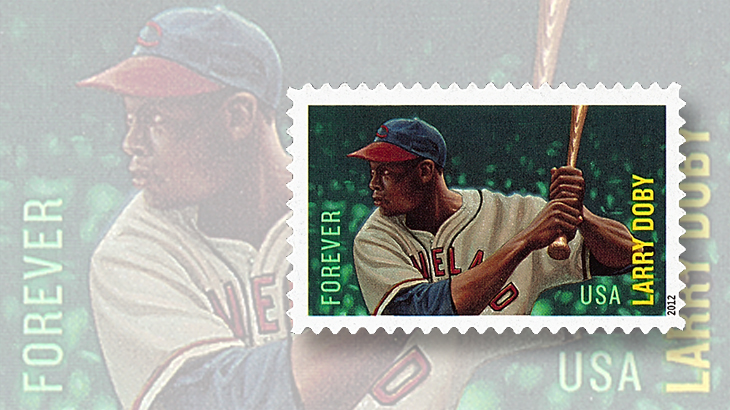 Larry Doby was honored on a forever stamp in 2012 as part of the Major League Baseball All-Stars set.

Hall of Fame baseball player Larry Doby was born Lawrence Eugene Doby on Dec. 13, 1923, in Camden, S.C. At age 23, Doby would become the second black player in baseball’s Major Leagues, and the first to play for an American League team.

Doby moved to Paterson, N.J., at age 14 and excelled in sports while attending high school. He joined the Newark Eagles of the Negro National Leagues as an infielder, and attended Virginia Union University in the off-season.

Doby was signed by Bill Veeck, the owner of the Cleveland Indians, to a Major League contract and made his debut with the club at age 23 on July 5, 1947. He was the second black player in the Major Leagues, after Jackie Robinson, who debuted with the National League’s Brooklyn Dodgers on April 15 of that year.

Like Robinson, Doby faced discrimination from fans and other players, but he also had the support of many, and became a consistent All-Star player in centerfield. The Indians won the World Series in 1948, and Doby became the first black player to hit a home run in the fall classic.

He broke through baseball’s color barrier, but he was also a star, leading the American League in home runs in 1952 and 1954, and compiling a career batting average of .283.

Doby played his final Major League game in 1959. He continued to work in baseball as a scout and coach, and was manager of the Chicago White Sox for part of the 1978 season, the second black manager after Frank Robinson.

Larry Doby was one of four baseball players honored in 2012 on forever stamps in the Major League Baseball All-Stars set (Scott 4695).