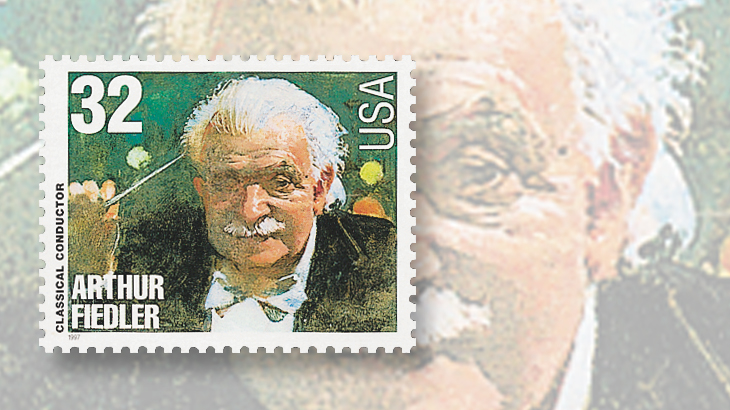 Arthur Fiedler, the longtime conductor for the Boston Pops Orchestra, on a 32¢ stamp issued in 1997.

Arthur Fiedler was known to the American public as the conductor of the Boston Pops Orchestra for almost 50 years. The orchestra’s many radio and television broadcasts and Fiedler’s genial nature made him a familiar figure to many around the world.

He was born in Boston, Mass., on Dec. 17, 1894, to parents who were themselves accomplished musicians. Austrian-born Emanuel Fiedler was a violinist with the Boston Symphony, and his wife, Johanna, was a pianist. Both parents encouraged Arthur in his musical pursuits.

While living with his family in Europe, where they moved in the early 1900s, Fiedler studied at the Royal Academy of Music in Berlin. He returned to Boston as World War I began, and joined the Boston Symphony as a violinist in 1915.

He formed a chamber group, the Arthur Fiedler Sinfonietta, in 1924, and was named as the Boston Pops’ 18th conductor six years later.

Fiedler had a knack for presenting classical works and light music in a setting that was eagerly enjoyed by his audiences, and an enthusiasm for sharing and spreading an appreciation of music through broadcast performances and outdoor concerts.

His series of entertaining programs for Christmas and Independence Day in particular helped to make the Boston Pops one of the most widely recognized classical groups in the world, with a string of top-selling recordings.

Fiedler continued to conduct the group until his death in 1979. He was honored on a 32¢ stamp issued Sept. 12, 1997 (Scott 3159), as part of the Classical Composers and Conductors set in the Legends of American Music series.