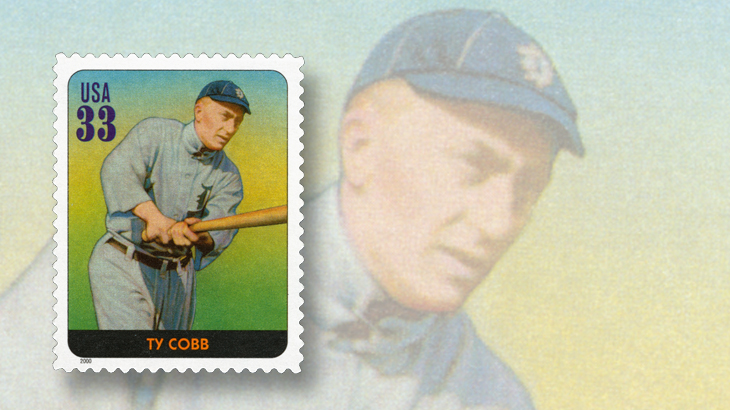 Baseball legend Ty Cobb was commemorated on this 33¢ stamp in 2000.

Tyrus Raymond “Ty” Cobb was born Dec. 18, 1886, in Narrows, Ga. He was one of the earliest stars of Major League Baseball, and is considered one of its greatest players to this day.

Cobb was a good outfielder with great range, but his batting and base-running skills made him a legend.

Cobb stole 897 bases during his career and accumulated a lifetime .366 batting average, an amazing figure for a single year, much less averaged over 24 years.

Cobb retired in 1928. When inductees to the National Baseball Hall of Fame were first elected in 1936, Cobb was on the first ballot, and received more votes than any other player.

Ty Cobb is honored on a 33¢ stamp in the Legends of Baseball set issued July 6, 2000 (Scott 3408d). The back side of the liner pane includes this biographical information:

“Known for his aggressive style at the plate and on the base paths, Ty Cobb may have been the greatest all-around player in Major League Baseball. In his 24-year career, 22 with the Detroit Tigers, the ‘Georgia Peach’ won 9 straight American League batting titles.”