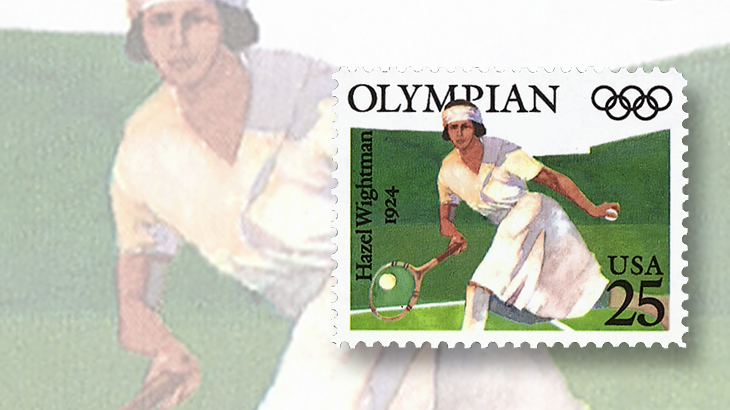 A legend from the world of tennis, Hazel Hotchkiss Wightman, was born Dec. 20, 1886, in Healdsburg, Calif. She began playing the sport in her teens, and continued at the University of California, where she graduated in 1911.

Between 1909 and 1950, she won 45 United States tennis titles. In an effort to stimulate interest in international women’s matches, she created the Wightman Cup competition in 1920 and donated a silver vase to be awarded for team play between Great Britain and the United States.

It was as an Olympic champion that Wightman was commemorated on a 25¢ stamp issued July 6, 1990, in advance of the 1992 Olympic Summer Games in Barcelona, Spain. The United States Postal Service was a sponsor of that 1992 event.

Five different stamps, including the Wightman stamp (Scott 2498), were issued in a pane of 35. The other honorees were track star Jesse Owens, track-and-field athlete Ray Ewry, swimmer Helene Madison, and boxer Eddie Eagan.