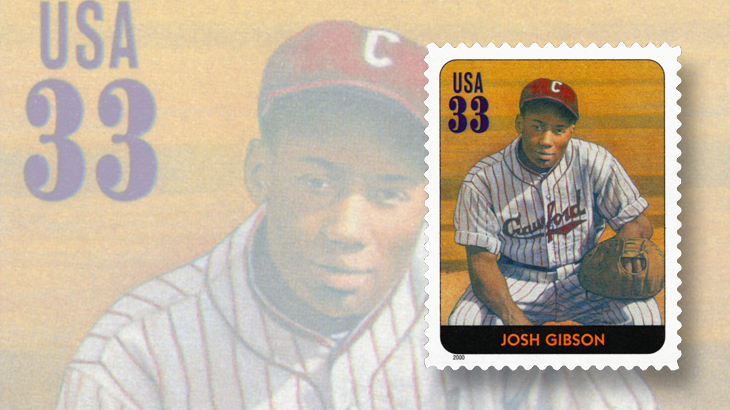 Baseball legend Josh Gibson, a power-hitting catcher, on a 33¢ stamp issued in 2000.

The absence of comprehensive recordkeeping in Negro Leagues baseball makes it difficult to fully assess the career of Josh Gibson, but he is without a doubt one of the greatest stars from any corner of the baseball universe.

Born Dec. 21, 1911, in Buena Vista, Ga., Gibson grew up in Pittsburgh, Pa., and played baseball as a teenager for the amateur team made up of employees for the department store where he worked.

In 1930 he joined the Homestead Grays, a Pittsburgh franchise in the Negro Leagues, as a catcher, filling in for an injured player. A few years later, he played for the Pittsburgh Crawfords and caught for another star of the game, Satchel Paige.

Gibson was an incredible power hitter during his 17-year career, hitting an estimated 800-plus home runs and compiling a .359 batting average, according to the National Baseball Hall of Fame, which elected him to be enshrined in 1972.