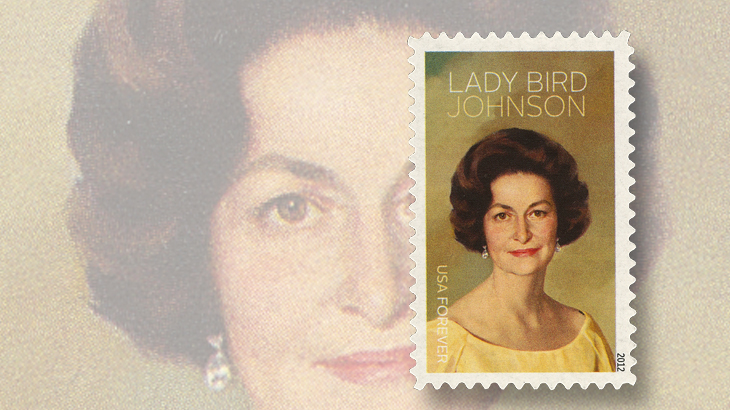 Lady Bird Johnson, a proponent of environmental beautification and the wife of President Lyndon Johnson, was depicted on a forever stamp issued in 2012.

She came to be known as Lady Bird as an infant, and the nickname remained with her throughout her life.

Lady Bird graduated third in her high school class in 1928, at age 15, and studied at St. Mary’s Episcopal College for Women and at the University of Texas, graduating with a history degree in 1933, and earning a degree in journalism in 1934.

The following year she met and married Lyndon Johnson, a Congressional worker with political ambitions. She supported his run for Congress in 1937 and his subsequent campaigns.

During her years in the White House, from 1963 to 1969, Lady Bird was deeply involved in environmental issues and campaigned for the Highway Beautification Act, which was signed into law in 1965.

A pane of six stamps honoring Mrs. Johnson was issued Nov. 30, 2012, with five forever stamps reproducing the designs of Beautification of America stamps issued in 1966 and 1969, and the sixth showing the official White House portrait of Lady Bird (Scott 4716).