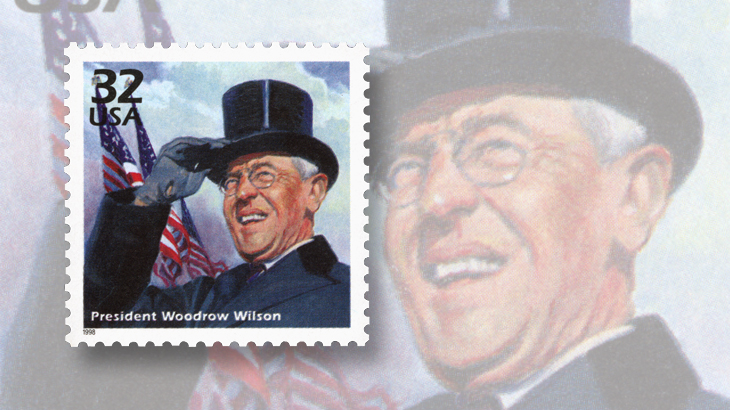 The 28th president of the United States, Woodrow Wilson, was born Dec. 28, 1856, in Staunton, Va., the son of Joseph Ruggles Wilson, a Presbyterian minister, and his wife, Jessie Janet Woodrow. The family later lived in South Carolina and North Carolina.

Wilson studied at the College of New Jersey (now Princeton University) and the University of Virginia Law School. He entered Johns Hopkins University in 1883, earning his Ph.D.

In 1885, Wilson published the first of his political science books, Congressional Government.

After marrying Ellen Louise Axson in 1885, Wilson taught at Cornell and at other universities. He became the president of Princeton in 1902.

In 1910, Wilson, a Democrat, ran as a progressive candidate for governor of New Jersey and won. Two years later, he was a presidential candidate, running against the Republican incumbent president, William Howard Taft, and Theodore Roosevelt, a former Republican president. With the Republican vote split, Wilson won the election.

When World War I erupted in Europe, Wilson advocated neutrality for the United States, but reversed himself when continued aggression led to a U.S. declaration of war in April 1917.

Wilson distributed his Fourteen Points for peace, and sought to create a League of Nations after the war. Congress refused to accept his negotiations, and the United States never became a member nation. For his peace efforts, however, Wilson received the Nobel Peace Prize in 1919.

Wilson’s wife Ellen died during his first presidential term, in August 1914. Wilson married Edith Bolling Galt at the end of the next year. Wilson suffered a stroke in 1919, and died in 1924.

A 17¢ definitive stamp honoring Wilson was issued Dec. 28, 1925 (Scott 623). He was also featured on later stamps, including definitives in the 1938 Presidential series and the 1954 Liberty series. Most recently, Wilson was depicted in 1998 on a 32¢ stamp in the Celebrate the Century commemorative series (Scott 3183k).