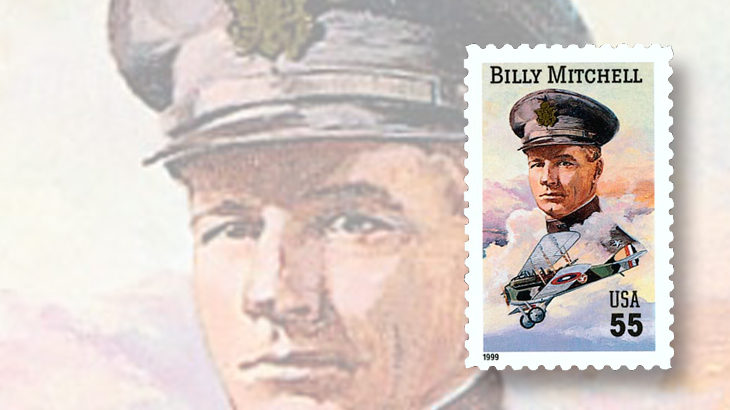 Military aviation pioneer Gen. Billy Mitchell was honored on a 55¢ stamp issued in 1999.

Billy Mitchell was a pioneer of military aviation who sought to establish a United States Air Force independent of the other existing service branches.

William L. Mitchell was born Dec. 29, 1879, in Nice, France, while his parents were on an extended tour of Europe. He was raised in Wisconsin while his father, John L. Mitchell, served first in the U.S. House of Representatives then in the U.S. Senate.

Billy Mitchell joined the Army as the Spanish-American War began in 1898. He was assigned to the Signal Corps Aviation Section in 1915 and, with the rank of major, commanded air units in combat during World War I. He was promoted to brigadier general near the end of the war.

Mitchell advocated for a stronger aviation force and became a public face for his cause, testifying before a House subcommittee and writing magazine articles. His fierce public criticism of the War Department and military leaders in 1925 led to his court-martial for insubordination. Mitchell resigned, but continued to promote the importance of military air power in articles, books and lectures.

He died in 1936, years before the development of the Army Air Force in World War II. In 1946, a Congressional Gold Medal was posthumously awarded to Mitchell “in recognition of his outstanding pioneer service and foresight in the field of American military aviation.”