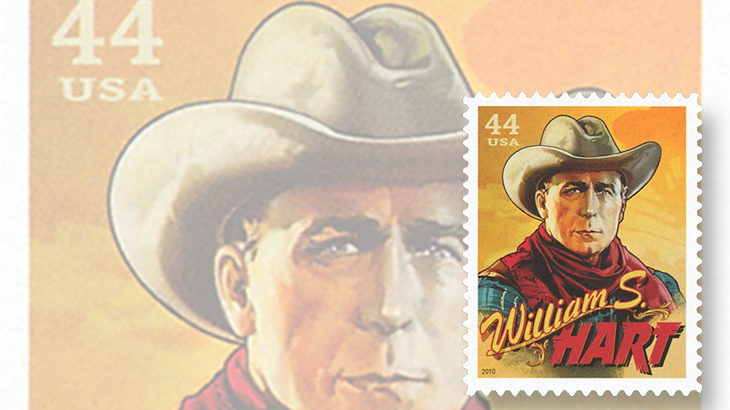 Silent film star William S. Hart was honored on a 44¢ commemorative in the 2010 Cowboys of the Silver Screen set.

Silent film actor William S. Hart was born Dec. 6, 1864, in Newburgh, N.Y. As a youngster he traveled the Old West with his father and was captivated by the Western way of life, absorbing details of cowboys and ranches that would serve him well in his later career.

After working for a time as a postal clerk, Hart became a theater actor while in his 20s and shared the stage with some of the finest actors of the day. His repertoire included Shakespearean roles, and he appeared as Messala in the original 1899 Broadway stage production of Ben-Hur.

Hart made a smooth transition to the silver screen when he was 50 years old and appeared in some 70 silent features up to 1925, most in Western settings with Hart as the star. His films, many of which he wrote and directed, were realistic portrayals of the West that Hart lived in and remembered.

In 1925 Hart produced and starred in his final film, Tumbleweeds, with King Baggot directing. He retired to his large California ranch, and died in 1946.