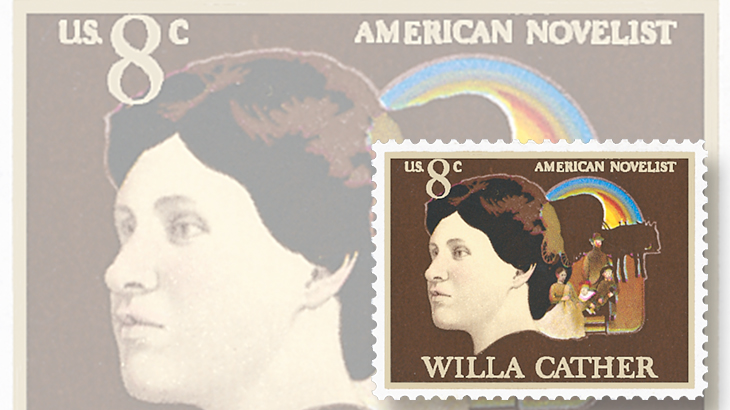 Author Willa Cather was commemorated on an 8¢ stamp in 1973, in the American Arts set.

Novelist Willa Cather, who was born Dec. 7, 1873, in Gore, Va., authored an important book series about life on the Great Plains. Her family moved to Nebraska when Willa was nine years old, and prairie life is an element of some of her most celebrated writings.

After graduating from the University of Nebraska with an English degree, Cather worked for a Pittsburgh newspaper before joining the editorial staff of McClure’s Magazine in New York City. She wrote short stories and essays before completing her first novel, Alexander’s Bridge, in 1912.

Her very successful Prairie Trilogy began with O Pioneers! in 1913 and continued with The Song of the Lark in 1915 and My Antonia in 1918.

She would write 12 novels in all, as well as poetry and six collections of short stories. Though she grew up in Nebraska, she lived much of her adult life in Manhattan, and also wrote novels set in other locations, including Virginia, New Mexico and Quebec.