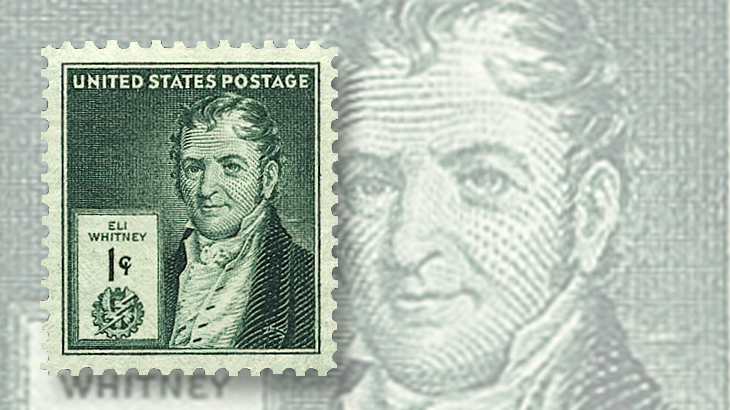 Inventor Eli Whitney was commemorated on a 1¢ stamp in the 1940 Famous Americans series.

His 1793 invention, which quickly and efficiently cleaned the sticky seeds out of picked cotton bolls, revolutionized cotton production and brought about an increased demand for cotton. However, the invention also resulted in expanding cotton fields, causing an increased need for cheap labor to grow and pick the cotton. That need fueled the demand for slave labor in the South.

Whitney was born in Westborough, Mass., the son of a farmer. Young Eli created a nail manufacturing device while in his teens, prior to entering Yale University at age 28. He graduated in 1792.

After developing and patenting the cotton gin, Whitney hoped to benefit economically, but he found that others were inexpensively manufacturing devices similar to his own. Court actions to protect his patent were costly and time-consuming, and in the end, Whitney failed to profit from it.

He promoted the concept of interchangeable parts in manufacturing and in later years undertook a project manufacturing muskets for the United States government.