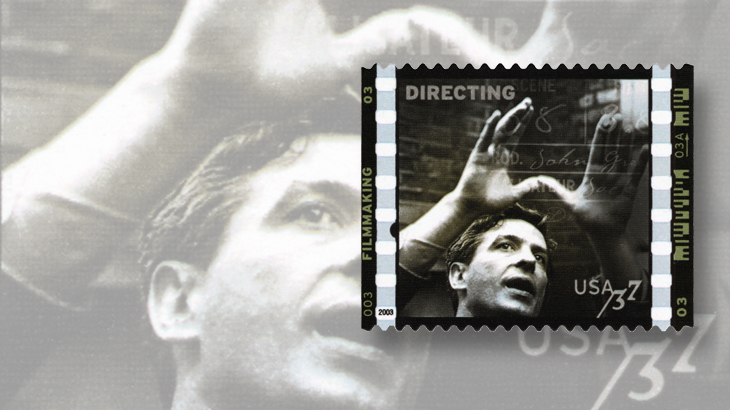 Film director and actor John Cassavetes is pictured on the 37¢ Directing stamp in the 2003 American Filmmaking set.

The United States Postal Service issued a 10-stamp set on Feb. 25, 2003, titled “American Filmmaking: Behind the Scenes.” Each 37¢ stamp in the set pays tribute to a different aspect of filmmaking, such as screenwriting, costume design, art direction, and so on. The stamp honoring directing (Scott 3772b) pictures Cassavetes at work on the 1970 film Husbands, which he wrote and directed. Cassavetes also starred in the film with Peter Falk and Ben Gazzara.

After graduating from the American Academy of Dramatic Arts in 1950, Cassavetes began appearing in films, on television and in the theater. He also taught in a drama workshop.

He wrote and directed the independent drama Shadows in 1959, which won the Critics Award at the Venice Film Festival.

In all, Cassavetes directed 12 films during his career and acted in many others, including The Killers in 1964, The Dirty Dozen in 1967, and Rosemary’s Baby in 1968.

Cassavetes and actress Gena Rowlands were married in 1954 and had three children together.