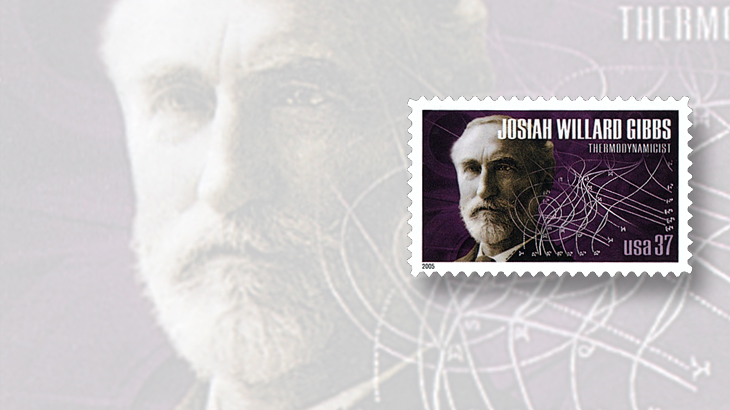 Josiah Willard Gibbs, one of the greatest American scientists in history, was honored on a 37¢ stamp in 2005.

Described as one of the greatest scientists of the 19th century, Josiah Willard Gibbs was born Feb. 11, 1839, in New Haven, Conn.

Albert Einstein called him "the greatest mind in American history."

Gibbs studied at Yale, earning his Ph.D. in 1863, the first doctorate awarded in the United States for engineering. After traveling abroad, Gibbs returned to Yale where he was appointed professor of mathematical physics, a position he would hold for the rest of his life.

Gibbs is known for his achievements in chemical thermodynamics, vector analysis and electromagnetic theory. Among his many publications was On the Equilibrium of Heterogeneous Substances, which introduced the phase rule and was translated into German and French, leading to the foundation of physical chemistry as a science.

Gibbs was honored on a 37¢ commemorative stamp issued May 4, 2005 (Scott 3907), one of four stamps in the American Scientists set.

The liner paper on the back of the stamp has the printed inscription, “Josiah Willard Gibbs (1839-1903) formulated the modern system of thermodynamic analysis. For this and other extraordinary achievements, Gibbs received some of the most prestigious awards of his era, including the Rumford Prize from the American Academy of Arts and Sciences.”