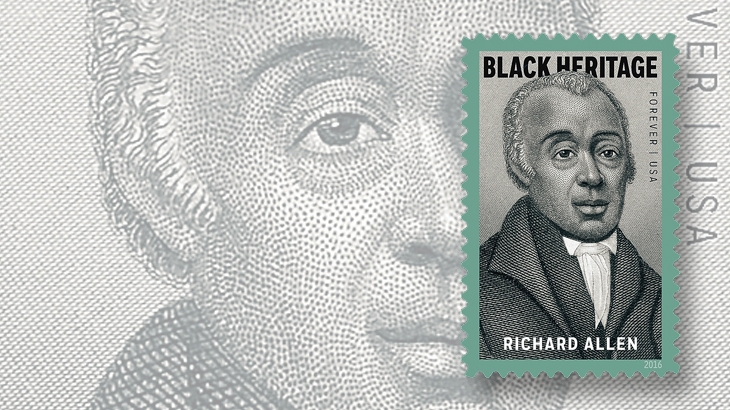 Richard Allen, the founder of the African Methodist Episcopal Church, was honored on a forever stamp issued Feb. 2, 2016.

Richard Allen, the founder of the African Methodist Episcopal Church and an early civil rights leader, was born into a family owned as slaves in Philadelphia, Pa., on Feb. 14, 1760.

Allen began his religious studies as a young man, and was able to obtain his freedom at age 23. He established himself as a preacher, and in 1786 he was offered an opportunity to lead black parishioners in Bible study at St. George’s Methodist Episcopal Church.

As the congregation at St. George’s grew, restrictions were placed on where black members were allowed to sit and pray. When one parishioner, Absalom Jones, was ordered to leave his seat during a service and move to another area of the church, the black members of the congregation, including Allen and Jones, walked out for good.

Allen helped Jones establish an Episcopal church in Philadelphia, and Allen then broke ground on a new Methodist church at Sixth Street and Lombard. Allen and Jones remained close friends and organized black Philadelphians to provide needed personal aid and medical services when yellow fever ravaged the city in 1793.

Allen became the nation’s first black Methodist Episcopal minister when he was ordained by a longtime supporter, Methodist Bishop Francis Asbury, in 1799. In 1816, Allen called for a meeting of other black church leaders, who gathered together to establish the independent African Methodist Episcopal Church.

Allen and his wife Sarah also set up a station on the Underground Railroad, aiding escaped slaves seeking freedom in the north by hiding them in the basement of the Mother Bethel Church they founded.