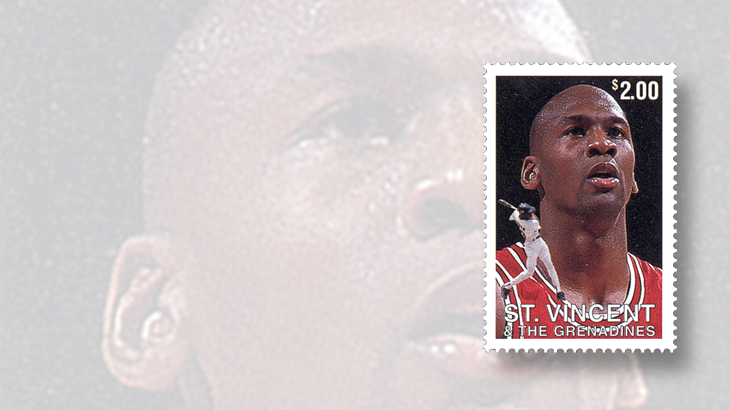 Legendary basketball star Michael Jordan was featured on a $2 stamp from St. Vincent in 1996.

Michael Jeffrey Jordan, considered by many as the greatest basketball player of all time, turns 53 today. He was born Feb. 17, 1963, in Brooklyn, N.Y.

After high school, Jordan attended the University of North Carolina and played for the Tar Heels as part of the 1982 national championship team. He was a member of the 1984 and 1992 U.S. Olympic basketball teams, winning gold with both teams.

Playing primarily with the Chicago Bulls of the National Basketball Association, Jordan earned five Most Valuable Player awards and six NBA Finals MVP awards, and led the Bulls to six championships between 1984 and 1998. He retired in January 1999, but returned in 2001 to play with the NBA’s Washington Wizards. His final NBA game was April 16, 2003.

During his tenure with the Bulls, Jordan stepped away from the game in 1993 and signed a minor league contract with the Chicago White Sox of Major League Baseball at age 30. He was an outfielder with the Birmingham Barons, Chicago’s double-A affiliate, and played in the Fall League for the Scottsdale Scorpions. He returned to the Bulls in March 1995.

In 2009, Jordan was inducted into the Naismith Memorial Basketball Hall of Fame.

Jordan is currently a majority share owner and chairman of the NBA Charlotte Hornets.