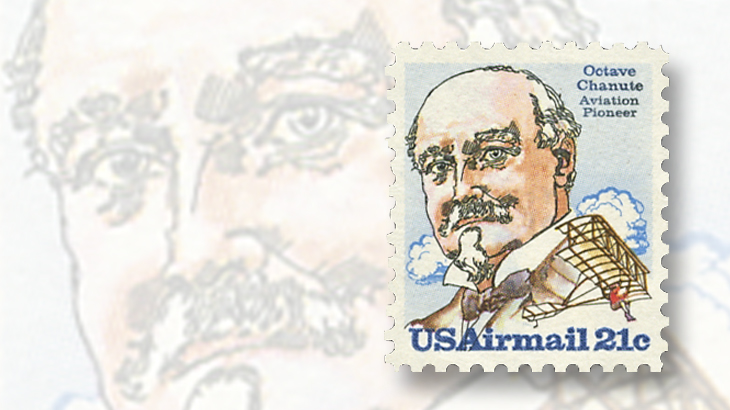 One of the two 21¢ airmail stamps honoring Octave Chanute issued in 1979.

Before the Wright Brothers, Octave Alexandre Chanute was developing his concept of manned flight.

Chanute was born in Paris, France, on Feb. 18, 1832. As a youngster, he moved to the United States with his family, and later became a civil engineer, designing and constructing railroads and bridges, including the first railroad bridge over the Missouri River, as well as stockyards in Chicago and Kansas City. He became a naturalized American citizen in 1854.

Chanute had a fascination with heavier-than-air flight, and though he never flew himself, he designed and built gliders that could be controlled by a person shifting his position within the apparatus.

Familiar with Chanute’s studies, including his 1894 publication Progress in Flying Machines, Wilbur Wright wrote to him in 1900. Chanute became a consultant and advisor for the Wright Brothers’ experiments in powered flight, meeting with the Wrights in Dayton on June 26, 1901.

Their relationship became strained as the brothers sought to protect their work and profit from it, while Chanute felt such information should be shared by all of aviation’s pioneers. The men were on the way to reconciling their differences when Chanute died in 1910.

His important contributions to early flight and to the Wright Brothers’ successes were acknowledged on a pair of 21¢ airmail stamps issued March 29, 1979 (Scott C93-C94).