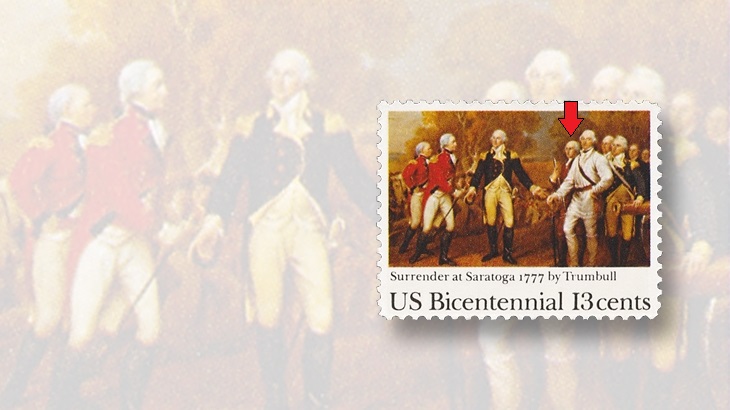 William Prescott is shown in John Trumbull's painting of the Surrender of General Burgoyne.

An important military leader in the American Revolution, William Prescott, was born Feb. 20, 1726, in Groton, Mass. At age 19, Prescott served during the 1745 King George’s War.

Prescott returned to farming, but joined the militia in Massachusetts with the rank of colonel as the revolution began. He marched with his men to Lexington in April 1775 only to find that the British troops they intended to engage had retreated.

In June, Prescott led 1,200 troops to Bunker’s Hill and Breed’s Hill on the Charlestown Peninsula to challenge the advancing British troops. The patriots doggedly defended twice against the British attack. With ammunition running low, Prescott called out to his ragged troops, "Don't fire until you see the whites of their eyes."

Though forced to retreat with the third British advance, the American troops were brave and well-disciplined under Prescott’s leadership.

Prescott later fought in the 1776 Battle of Long Island, and with the Massachusetts volunteers at the 1777 Battle of Saratoga, where he advised Maj. Gen. Horatio Gates.

Prescott is depicted in John Trumbull’s painting Surrender of General Burgoyne, which portrays the events of the British surrender following the Battle of Saratoga.

The Library of Congress reports that Prescott is also portrayed in the John Trumbull painting The Battle at Bunker’s Hill Near Boston, which might also place him in the 1975 10¢ stamp showing a detail from that painting (Scott 1564).