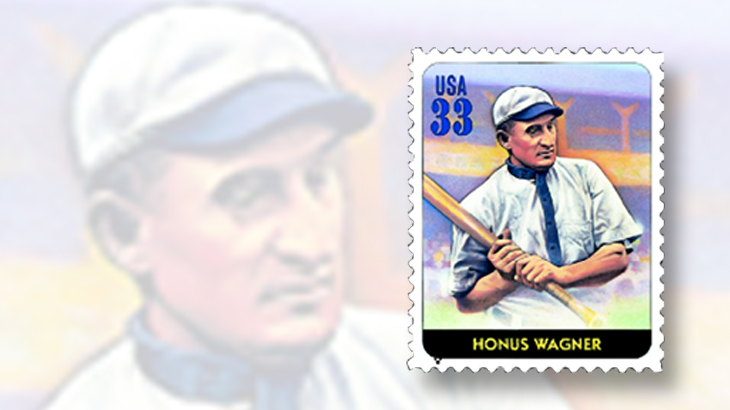 Baseball hall-of-famer Honus Wagner, honored on a 33¢ stamp from 2000.

Considered by many to be the greatest shortstop in Major League Baseball history, Honus Wagner was born Feb. 24, 1874, in Chartiers, Pa., less than 30 miles from Pittsburgh, where Wagner would earn his place in baseball history.

He was born Johannes Peter Wagner, the son of German immigrants. He began his major league career with the Louisville Colonels, joining the Pittsburgh Pirates (at the time, spelled “Pittsburg”) when the Colonels folded in 1899 as part of the National League contraction.

With the Pirates, Wagner won the batting championship in 1900, and his slugging helped carry the Pirates to the World Series in 1903, though they lost the series to the Boston Americans. Wagner and the Pirates returned to the fall classic in 1909, and defeated the Detroit Tigers (and their young star slugger Ty Cobb), by winning four games in the best-of-seven series.

After a stellar career that included 15 consecutive .300 seasons, 3,420 hits, and eight National League batting titles, Wagner retired in 1917 and joined the Pirates coaching staff, continuing to contribute to the team for many years. He was inducted into the National Baseball Hall of Fame in 1936.