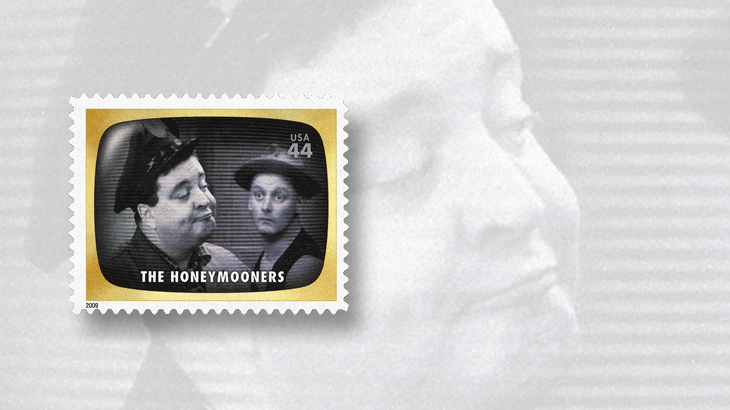 Comedy legend Jackie Gleason, pictured on the 44¢ stamp from 2009 commemorating his TV show The Honeymooners.

Feb. 26 marks the 100th birth anniversary of entertainer Jackie Gleason, who was born on that date in 1916.

A popular star of television, movies and music, Gleason endeared himself as an actor who could transition effortlessly from comic slapstick to serious drama. He may be best remembered for his role as cantankerous bus driver Ralph Kramden in the television comedy series The Honeymooners.

The series began in 1951 with a sketch on Cavalcade of Stars, Gleason’s first television variety show. As the program evolved into The Jackie Gleason Show, it featured many of Gleason’s memorable comic characters, including millionaire Reginald van Gleason III, Joe the bartender, and the pantomimed “Poor Soul.”

Gleason recorded a successful string of romantic mood music albums in the 1950s and 1960s, and earned a Tony award in 1960 for his role in the Broadway musical Take Me Along.

Gleason also earned an Oscar nomination for his portrayal of Minnesota Fats in the 1961 Paul Newman film The Hustler. While he appeared in many other movies, he found later success in film comedy as Texas sheriff Buford T. Justice in a series of three Smokey and the Bandit movies from 1977 to 1983.

Known throughout his career as “the Great One,” Gleason’s final film saw him in the role of Tom Hanks’ father in Nothing in Common (1986). He was battling colon cancer while filming the movie, and died June 24, 1987, at age 71.