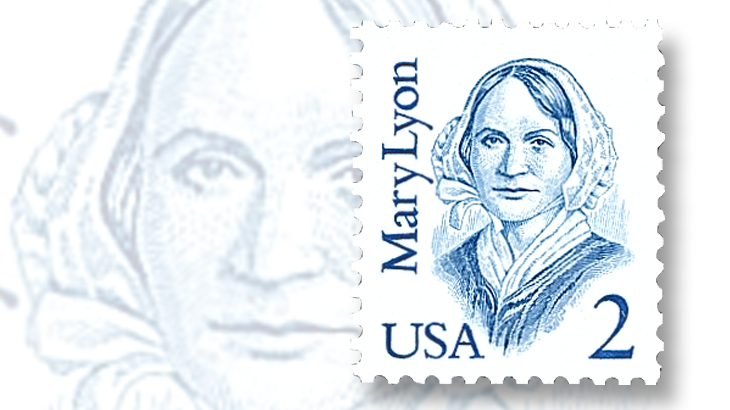 Mary Lyon, the founder of Mount Holyoke College, is honored on a 2¢ definitive stamp from 1987.

About six weeks after starting her studies at Mount Holyoke Female Seminary in 1847, Emily Dickinson wrote to a friend, “One thing is certain, and that is, that Miss Lyon and all the teachers seem to consult our comfort and happiness in everything they do, and you know that is pleasant.”

Miss Lyon, referred to in Dickinson’s letter, was Mary Mason Lyon, the school’s founder and president, who was honored on Feb. 28, 1987, on a 2¢ definitive stamp in the Great American series.

Lyon was born exactly 190 years earlier, on Feb. 28, 1797, near Buckland, Mass. After her father’s death and her mother’s departure, the family farm was operated by her brother Aaron, and 13-year-old Mary kept house while attending school, and later, teaching classes.

In its Philatelic Release No. 6 for 1987, the United States Postal Service wrote, “She organized Wheaton College in 1834 in Norton, Massachusetts. While developing detailed plans to start the institution, she taught, studied, organized and carried a full administrative load for 130 students at highly respected Ipswich Female Seminary.

“To found Mount Holyoke in 1834, at a time when advocates of women’s education faced huge obstacles, Miss Lyon raised more than $12,000 — enough money to construct a five-story building that housed a faculty of four and a first class of 80 young women.”

Her efforts contributed significantly to the expansion of higher education for women in the United States, and she is celebrated as an early leader in women’s rights.

In 1905, she was inducted into the Hall of Fame for Great Americans.