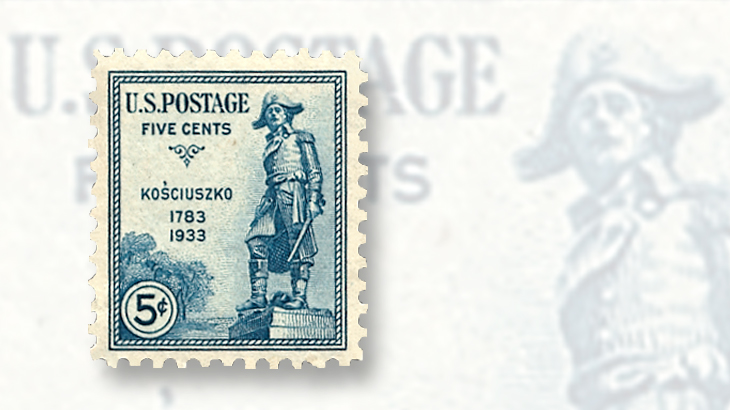 A 5¢ stamp issued in 1933 pays tribute to Gen. Tadeusz Kosciuszko, who served in the Continental Army.

He studied at the Royal Military Academy in Warsaw, Poland, and continued his studies in France. He traveled to America at age 30, joining the American cause in the revolution as a colonel and engineer in the Continental Army.

Kosciuszko was responsible for the strengthening of American fortifications at Saratoga in 1777, West Point beginning in 1778, and other strategic locations. Because of his important contributions to the American victory, he was promoted to brigadier general in 1783 and awarded the Society of the Cincinnati medal by Gen. George Washington.

Kosciuszko returned to Poland as a veteran freedom fighter and led the 1794 uprising against Imperial Russia and the Kingdom of Prussia. Wounded in the unsuccessful effort, he returned to the United States.

A 5¢ blue stamp depicting the statue of Gen. Kosciuszko in Washington, D.C.’s Lafayette Park (Scott 734) was issued Oct. 13, 1933, in seven cities, including Kosciusko, Miss. The stamp commemorates the 150th anniversary of Kosciuszko’s naturalization as an American citizen.