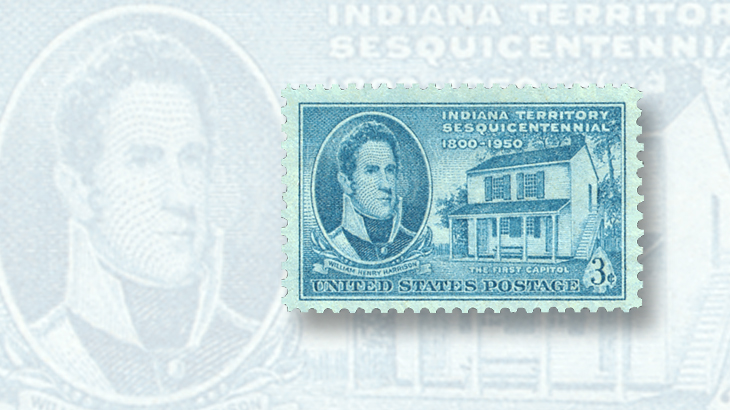 William Henry Harrison is depicted on a 1950 3¢ commemorative stamp for the 150th anniversary of the establishment of the Indiana Territory.

The ninth president of the United States, William Henry Harrison, was born Feb. 9, 1773, on the Berkeley Plantation in Charles City County, Va.

William studied medicine at the University of Pennsylvania, but after the death of his father he left school and joined the Army, where he served as an aide-de-camp to Gen. “Mad Anthony” Wayne during the Northwest Indian War.

Harrison is depicted on a 3¢ stamp from 1950 honoring the 150th anniversary of the establishment of the Indiana Territory (Scott 996).

Harrison led forces against American Indians in 1811 at the Battle of Tippecanoe (near the current location of Lafayette, Ind.). The victory established Harrison with a reputation as a war hero, as did his record as commander of the Army of the Northwest in the War of 1812.

After the war, Harrison served in the House of Representatives and in the Senate, representing Ohio, and as minister to Colombia in 1828. He ran unsuccessfully for president in 1836, finally achieving the office as the Whig candidate in 1840.

However, his term as president was the shortest of any in history. During his first month in office, Harrison caught a cold that turned into pneumonia. He died on April 4, 1841, 31 days after his inauguration. Harrison was the first U.S. president to die in office; he was succeeded by his vice president, John Tyler.