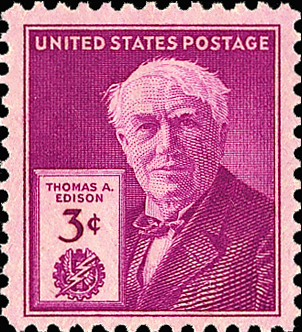 Born Feb. 11, 1847, in Milan, Ohio, Thomas Alva Edison had little formal education. He was taught at home by his mother, and followed his own interests in science and technology.

After moving with his family to Michigan, Edison learned to operate a telegraph, and as a young adult he began working on various inventions, including an improved stock ticker.

By 1876 he was working in Menlo Park, N.Y., developing a the tin-foil phonograph for sound recording. Edison was soon working on an electrical lighting system and companion incandescent bulb, which was first demonstrated publicly in 1882.

He continued to develop a practical phonograph and records, and turned his attention to creating motion pictures and other projects in his new laboratory in West Orange, N.J.

In all, Edison filed more than 1,000 patents for his inventions, many of which today remain an essential part of our daily lives.

A number of United States stamps feature Edison's inventions, but during his lifetime a 1929 2¢ carmine rose stamp commemorated the 50th anniversary of the incandescent electric lamp, and was inscribed "Edison's Electric Light's Golden Jubilee" (Scott 654-656).

Did you see how USPS fired back at The Onion?: Morning Report