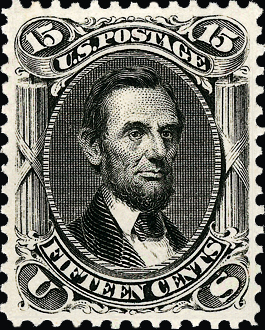 Certainly one of the most familiar faces on American stamps, Abraham Lincoln, the nation’s 16th president, was born Feb. 12, 1809, in Hardin County, Ky.

He was a farmer, store clerk and local postmaster, serving in the 1832 Black Hawk War before beginning his practice of law and entering politics. His term in the Illinois House of Representatives began in 1834.

Lincoln was elected to the United States Congress in 1846, and following a failed run for the U.S. Senate, he became a candidate for president in 1860, and the first Republican elected to the nation’s highest office.

The secession of southern states began prior to Lincoln’s inauguration, and the United States entered Civil War just months later in 1861. Lincoln led the country throughout the war, but with the end of the insurrection imminent, he was shot and killed by southern sympathizer John Wilkes Booth on April 14, 1865.

A large 25¢ orange red newspaper stamp bearing Lincoln’s portrait was issued in September 1865 (Scott PR3), and a 15¢ black postage stamp (77) was issued in April 1866, one year after the president’s assassination.

Lincoln has since appeared on more than 50 U.S. stamps, and has been honored on the stamps of many different nations around the world.