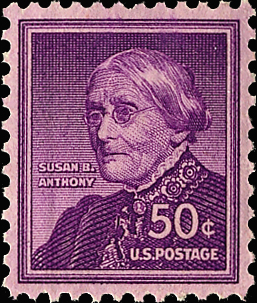 Susan B. Anthony was born in Adams, Mass., Feb. 15, 1820, and died at age 86 in 1906. Though she worked much of her life to obtain suffrage for women — the right to vote in elections — it wasn't until 14 years after her death, in 1920, that the 19th Amendment to the United States Constitution was passed, granting women the right to vote.

Born into a Quaker family, Anthony was originally a teacher. She joined the women's rights movement in 1852, and with a strong sense of justice, she became an activist in anti-slavery efforts, speaking at rallies and publishing a newspaper to support the causes she believed in.

She sought equality for women not only in voting rights, but in the workplace, in property rights, in marriage and in education. She also campaigned for stronger liquor laws and temperance, believing alcohol abuse was a detriment to families.

A 3¢ violet stamp issued in 1936 shows a portrait of Anthony and bears an inscription that celebrates "Suffrage for Women" (Scott 784).