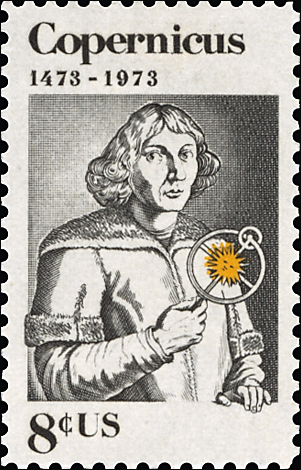 To mark the 500th birthday of the early astronomer Nicolaus Copernicus, who was born Mikolaj Kopernik in Thorn, Poland, on Feb. 19, 1473, countries all over the world, including the United States, made plans to issue commemorative stamps.

Copernicus studied astronomy and mathematics at the University of Krakow. He observed that the Earth revolved around the sun, developing what is known as a heliocentric theory that was contrary to the long-held belief that Earth was motionless at the center of the universe, while all other heavenly bodies orbited around it.

His groundbreaking observations were made without the aid of a telescope, which wasn't developed until the 17th century. As a result of his vision, he has been referred to as the father of modern astronomy.

The central design of the U.S. stamp is based on an 18th-century engraving. In his hand, Copernicus holds an armillary sphere that was used as a teaching aid to explain his theory. The engraved design was entirely intaglio-printed, but the yellow color of the sun at the center of the armillary sphere was printed by offset.

The U.S. stamp was designed by Alvin Eisenman, and engraved by Arthur W. Dintaman (vignette) and Albert Saavedra (lettering).