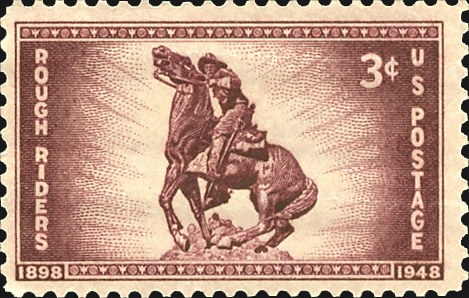 A monument in the Prescott, Ariz., town square pays tribute to the Rough Riders, the 1st United States Volunteer Cavalry assembled in 1898 during the Spanish-American War and led by Leonard Wood and Theodore Roosevelt.

The battle included other U.S. cavalry and infantry regiments, but the Rough Riders and Roosevelt played a significant role in the bloody conflict with the outnumbered Spanish troops.

O’Neill was originally a newspaperman in Arizona, reporting in Tombstone during the days of Wyatt Earp, and in Prescott, where he also joined the local militia. He was elected sheriff of Yavapai County in 1888, and later became mayor of Prescott.

O’Neill joined the Rough Riders in 1898 and saw action as the captain of Troop A in the Battle of Las Guasimas in June. But less than a week later, as the Americans prepared to advance on San Juan Heights, he was killed by Spanish gunfire.

The monument showing O’Neill on horseback, created by sculptor Solon Borglum in 1907, is featured on a 3¢ stamp issued Oct. 27, 1948 (Scott 973), to commemorate the 50th anniversary of the organization of the Rough Riders.