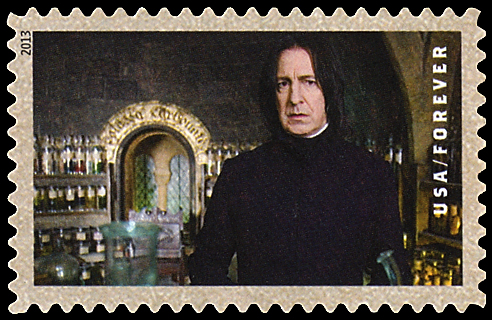 On Nov. 19, 2013, 14 living people were honored on United States stamps — only the second time that photographs of living people were intentionally used in the design of U.S. stamps. The first was the Heroes of 2001 semipostal stamp (Scott B2) issued in 2001.

In an unusual twist, every one of the individuals in the 2013 set was born in a country other than the United States.

Alan Rickman is one of the 14 living actors featured on the 20 commemorative stamps in the Harry Potter set. Rickman, born Feb. 21, 1946, turns 69 years old today.

A native of London, England, Rickman is an acclaimed performer in theater, television and film, achieving great success in roles as varied as criminal terrorist Hans Gruber in Die Hard (1988); the monk Grigori Rasputin in Rasputin, Dark Servant of Destiny (1996); resentful television actor Alexander Dane in the science fiction adventure comedy Galaxy Quest (1999); and President Ronald Reagan in The Butler (2013).

The postage stamp picturing Rickman (Scott 4834) has no identifying inscription other than "USA/FOREVER" reading up along the right edge. It shows the actor in his role as potions teacher Severus Snape in Harry Potter and the Order of the Phoenix (2007).

Rickman portrayed Snape, a key figure in the extended Harry Potter history, in each of the eight films in the series (2001-11).