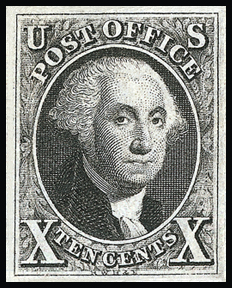 The first president of the United States, George Washington, was born Feb. 22, 1732, in Westmoreland County, Va. His family’s plantation was there, near Pope’s Creek, but the family moved to the location known now as Mount Vernon when young George was just three years old.

Washington was appointed county surveyor when he was 17, and served in the French and Indian War. He married Martha Dandridge Custis in 1759, and finally returned to lead the working farm at Mount Vernon.

But with the start of the American revolution, Washington was elected commander-in-chief of the Continental Army, defeating the British forces in 1781 after six years of war.

He was elected president in 1787 by the electoral college at the Constitutional Convention in Philadelphia, and served his country for another eight years.

When the first federal postage stamps were created in 1847, the 5¢ stamp carried the portrait of Benjamin Franklin, and the 10¢ black honored George Washington (Scott 2).

Over the years Washington has appeared on more United States stamps than any other individual.