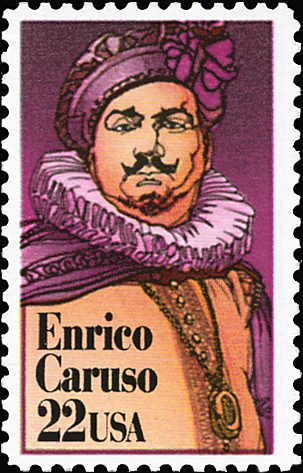 It is unusual when people who were born in other countries are honored on United States stamps, but not entirely uncommon. One such subject is the operatic tenor Enrico Caruso, who was born in Naples, Italy, on Feb. 25, 1873.

After singing in Russia, Argentina, and at the famed La Scala opera house in Milan, Caruso made his first appearance at the Metropolitan Opera in New York City at age 30.

He was a star at the Met for 17 consecutive years, with a firm reputation as one of the finest tenors in the world.

He was among the first performers to record commercially, and the 1902 recording of his performance of Vesti la Giubba from Ruggero Leoncavallo's Pagliacci was a top-selling 78 r.p.m. record.

The design by artist Jim Sharpe shows the singer in his role as the Duke of Manua in Giuseppe Verdi's three-act opera, Rigoletto. The first-day ceremony for the stamp issue was held at the Metropolitan Opera at Lincoln Center.