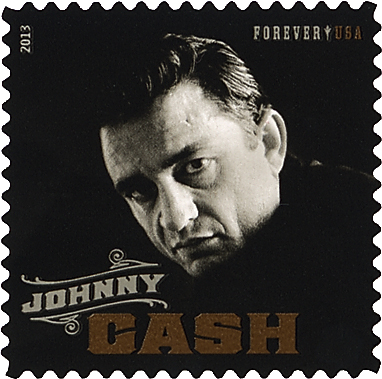 A legendary figure in American entertainment throughout the last half of the 20th century, Johnny Cash was honored in 2013 with a commemorative stamp in the Music Icons series.

Born John R. Cash in Kingsland, Ark., on Feb. 26, 1932, he grew up in a farming family, learning guitar as a youngster, and singing and writing songs at an early age. He found work in a Michigan auto plant before enlisting in the U.S. Air Force, but he continued to create music, eventually landing a deal with Sun Records in Memphis, Tenn.

His first recordings, Hey Porter and Cry, Cry, Cry, were followed by a string of successful singles, including I Walk the Line in 1956, Ring of Fire in 1963, and Folsom Prison Blues in 1968.

His tumultuous personal life at times took a toll on his career, but Cash overcame many obstacles, landing his own television show in 1969. His 1954 marriage to Vivian Liberto ended in divorce in 1967. The following year he married musician June Carter, and they remained together until her death in 2003.

Though his popularity diminished in the late 1980s, Cash began working with producer Rick Rubin in 1994, resulting in a revitalized career and a series of acclaimed albums for Rubin's American Recordings label.

Cash's health began to decline in the late 1990s, and he died of complications from diabetes on Sept. 12, 2003, just four months after his wife, June, passed away.