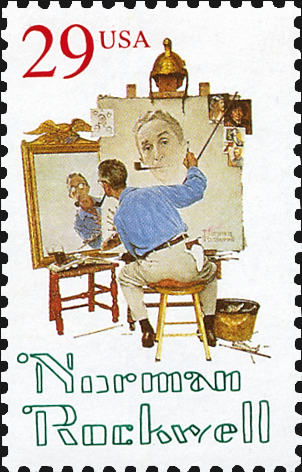 A 29¢ stamp showing the painting Triple Self-Portrait by Norman Rockwell was issued to commemorate the centennial of the artist's birth.

The Norman Rockwell Museum in Stockbridge, Mass., will celebrate the artist's 121st birthday on Feb. 3 with birthday cake and a program by the museum's curator of education.

Rockwell was born Feb. 3, 1894, in New York City, and studied at Chase Art School (the New York School of Art), the National Academy of Design, the Art Students League and Otis College of Art and Design.

His success as an illustrator included more than 320 covers for the Saturday Evening Post, 10 years as a contributor to Look magazine, and a long association with the Boy Scouts of America. This national exposure resulted in widespread popularity and great public acclaim that continues to this day.

His illustrations and paintings have appeared on stamps from many nations, including several United States stamps.

In 1960, a Rockwell illustration of a Boy Scout giving the Scout sign was featured on a 4¢ stamp commemorating the 50th anniversary of the Boy Scouts of America (Scott 1145).

To commemorate Rockwell's 100th birthday in 1994, the U.S. Postal Service issued a 29¢ stamp with his charming Triple Self-Portrait, and a souvenir sheet of four 50¢ stamps reproducing his Four Freedoms paintings (Scott 2839-2840).

In 2001, Rockwell's Doctor and Doll painting, which appeared on a 1929 Saturday Evening Post cover, was shown on a 34¢ stamp in the American Illustrators pane (Scott 3502s).