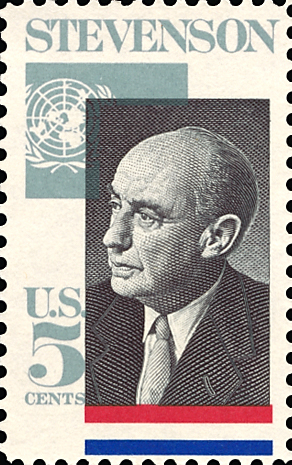 Adlai E. Stevenson II, who served as ambassador to the United Nations, was born Feb. 5, 1900.

The younger Stevenson served in the U.S. Navy and graduated from Princeton University in 1922, later obtaining a law degree from Northwestern University.

He worked in the administration of President Franklin Roosevelt and then became governor of Illinois in 1949, leading to his nomination as the Democratic candidate for president in 1952. He was soundly defeated by Dwight Eisenhower, and the same match-up in the 1956 presidential election produced the same result.

In 1960 John F. Kennedy was the Democratic candidate. Following his election, Kennedy named Stevenson to the post of ambassador to the United Nations.

As U.N. ambassador he was instrumental in confronting the Soviet Union during the Cuban Missile Crisis, and he sought a solution to the growing threat of nuclear weapons escalation.