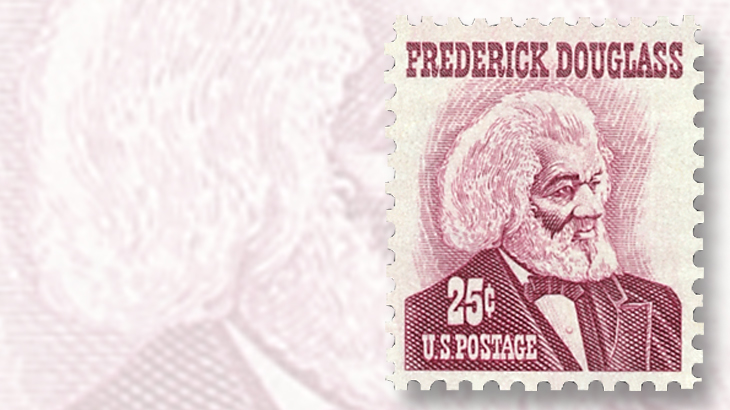 The stamp was issued on the date that Douglass once claimed as his birthdate. He was born into slavery in Talbot County, Md., near Tuckahoe Creek, as Frederick Augustus Washington Bailey. The year was 1817 or 1818, but his birthdate was not recorded. Douglass himself chose Feb. 14, recalling that his mother, who died when he was about 10 years old, had called him her little valentine.

Douglass escaped from slavery in 1838 when, disguised as a sailor, he boarded a train in Baltimore and made his way to New York City. He married Anna Bailey, and they took on the last name Douglass to escape detection as they settled in New Bedford, Mass.

Douglass became a preacher and an abolitionist, speaking out against the institution of slavery. He published his autobiography, Narrative of the Life of Frederick Douglass, an American Slave, in 1845, and its success allowed him to purchase his legal freedom soon after. For many in the North, the book provided a personal insight into slavery that strengthened opposition to its continued existence.

Following a two-year lecture tour in England, Douglass edited the abolitionist newspaper The North Star. He met with and counseled President Abraham Lincoln during the Civil War, and spoke out on the subjects of voting rights for blacks and for women. He was named Marshal and Recorder of Deeds for the District of Columbia, and was chosen by President Benjamin Harrison to serve as U.S. Minister to Haiti in 1889.

Douglass died Feb. 20, 1895, shortly after attending a meeting of the National Council of Women in Washington, D.C. Newspapers in the United States and other countries celebrated his life, including an article in the Washington Post that described him as “one of the great men of the century.”