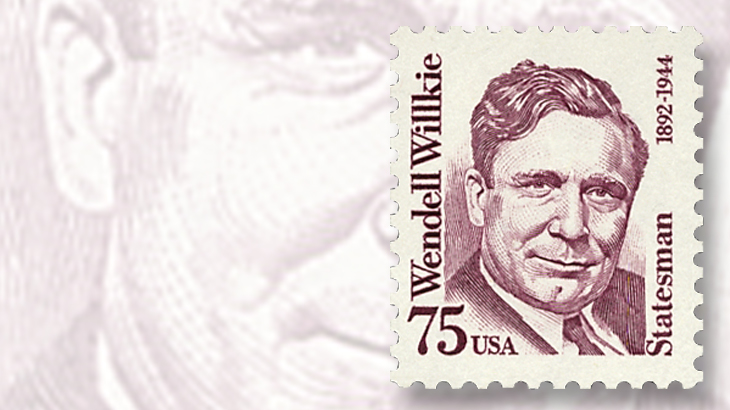 The Republican Party's presidential candidate in 1940, Wendell Willkie, on a 75¢ stamp issued in 1992.

Wendell Willkie, the Republican Party candidate for president in 1940, was born Lewis Wendell Willkie on Feb. 18, 1892, in Elwood, Ind. He earned his law degree from Indiana University, and joined the U.S. Army, serving in France during World War I.

Willkie became a successful corporate lawyer, moving to New York in 1929 to join the utility company Commonwealth and Southern Corporation, where he was named president in 1933. He was also active in the Democratic Party, and worked in the unsuccessful campaign of Newton D. Baker to secure the 1932 Democratic nomination for president. The party chose Franklin D. Roosevelt to run instead.

Although Willkie initially supported the new president, Commonwealth and Southern Corporation and other utilities opposed aspects of FDR’s Tennessee Valley Authority project, which they felt unfairly competed against them. Willkie represented his company and the power industry in negotiations and court actions against the TVA.

His efforts brought him national notoriety, and he switched political parties in 1939, opposing some of Roosevelt’s New Deal policies that he described as bad for business. He was nominated by the Republicans as their presidential candidate, but lost the election, claiming 45 percent of the popular vote versus 55 percent for FDR.

After the election, Roosevelt and Willkie worked together as World War II dominated Europe. Willkie visited overseas and hand-delivered a letter from Roosevelt to prime minister Winston Churchill. However, Willkie suffered a series of heart attacks in 1944, and died at age 52.