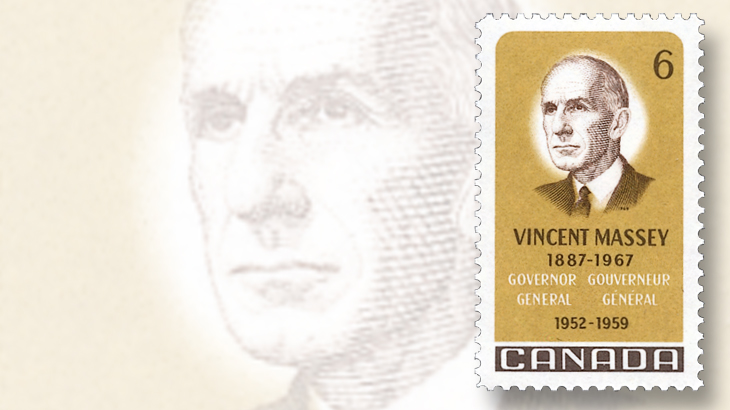 The first Canadian-born governor general, Vincent Massey, was honored on a 6¢ stamp in 1969.

Vincent Massey, who served more than seven years as governor general of Canada, was born Feb. 20, 1887, in Toronto, Ontario.

Massey studied history at the University of Oxford in England and, along with his brother Raymond (1896-1983), later a prominent film and television actor in the United States, served in Canada’s Army during World War I.

Vincent Massey became an executive in his father’s Massey-Harris firm (later the Massey-Ferguson Tractor Co.) prior to serving as Canada’s first minister to the United States in 1926. He was named Canadian high commissioner to England in 1943 and headed the National Gallery of Canada from 1948-52.

Massey was then chosen to serve as governor general of Canada, the first Canadian-born representative so designated. During his tenure, from 1952 until 1959, Massey sought to promote Canadian artistic achievements and unify the diverse cultures of Canada.