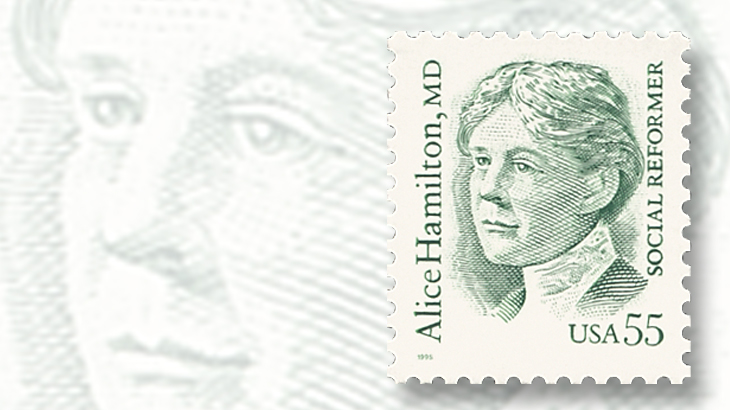 Pioneering medical doctor Alice Hamilton was honored on a 55¢ definitive stamp in 1995.

In its Stamp News Release 95-050, the United States Postal Service described Alice Hamilton as a “crusader for industrial medicine.” Born in New York City on Feb. 27, 1869, Hamilton studied at the University of Michigan, earning her medical degree in 1893, followed by advanced research in Germany, and at Johns Hopkins University Medical School.

She moved to Hull House in Chicago after she accepted a position as professor of pathology at Northwestern University in 1897. In 1919, she joined the faculty of Harvard University as assistant professor of industrial medicine.

“During the 1910s and early 1920s her work in the field of industrial medicine exposed many occupational hazards as she campaigned for ventilation, antitoxic rinses and other workplace safeguards against industrial poisons,” the Postal Service wrote about Hamilton’s career. “Her pioneering work Industrial Toxicology (1934) is still regarded as a primary text for medical students.”

Hamilton also advocated for safe work environments for women, child labor laws, women’s suffrage, and other social reforms. In 1956, she was named Woman of the Year by Time magazine. She died at age 101 on Sept. 22, 1970.