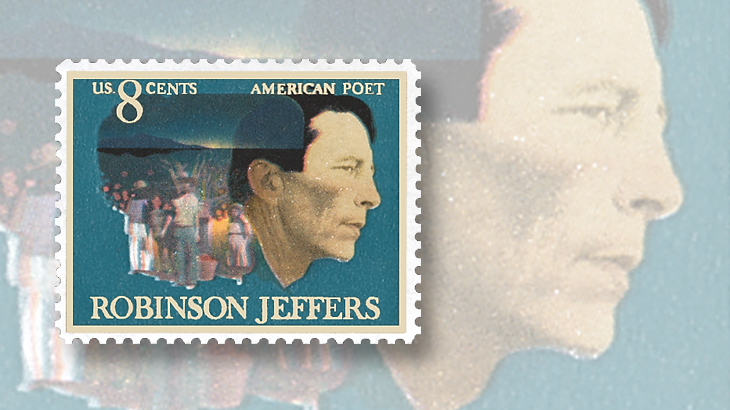 Robinson Jeffers was commemorated on an 8¢ stamp in 1973. The inscription at upper right reads "American Poet."

American poet Robinson Jeffers was born Jan. 10, 1887, in Allegheny, Pa., now part of Pittsburgh. He graduated from Occidental College in California at age 18 and pursued postgraduate work at the University of Southern California. There he met Una Call Kuster and fell in love, though Una was already married. The Kuster marriage ended, and Jeffers married Una in 1913, settling with her in Carmel-by-the-Sea.

His works Tamar  in 1924 and Roan Stallion in 1925 brought Jeffers attention and a following that continued with later publications. His themes included praise of nature and political commentary.

Jeffers’ narrative poetry expressed the personal philosophy he described as “inhumanism.” In the preface to his 1948 book The Double Axe, Jeffers wrote that inhumanism “offers a reasonable detachment as rule of conduct, instead of love, hate and envy.”

The Academy of American Poets adds, “One of his favorite themes was the intense, rugged beauty of the landscape set in opposition to the degraded and introverted condition of modern man.”

When the United States Postal Service announced that it would issue an 8¢ stamp for Jeffers, it said that his works were mainly allegories, “imbued with overtones from the Greek and Roman tragedies.”

Jeffers studied the classics in his youth, and in 1947, he successfully adapted the ancient Greek tragedy Medea by Euripides for Broadway.

The 1973 stamp (Scott 1485) includes a portrait of Jeffers and a smaller image of three individuals and a burro, representing his Carmel neighbors as subjects of his poetry.