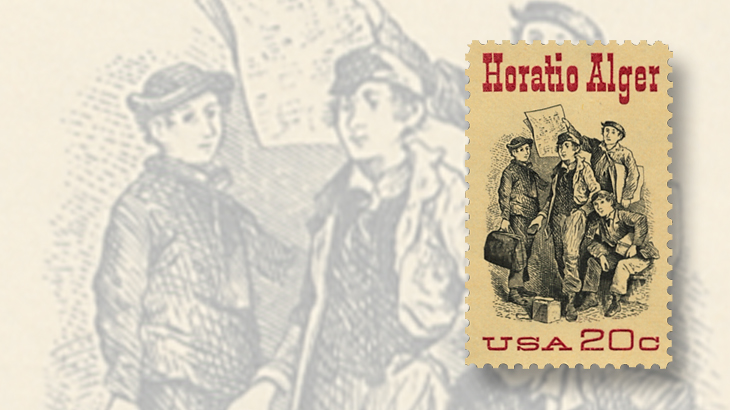 A 20¢ commemorative stamp for author Horatio Alger was issued in 1982 to mark the 150th anniversary of his birth.

A story where a self-made protagonist rises from “rags to riches” is often called a Horatio Alger tale, after the American author who created many such fables during the course of his career.

Young Horatio enrolled at Harvard University and studied for the ministry himself, but abandoned his position in a Massachusetts church after charges of improper conduct were leveled against him.

Throughout his schooling and work in the church, Alger had spent time writing, and many of his tales were crafted for young readers. After moving to New York City, he set up an office at the Newsboys’ Lodging House, and wrote fictional accounts of the experiences told to him by the boys who lived there.

His Ragged Dick series of six books were among his most popular, but Alger wrote more than 100 books before his death in 1899.

The United States Postal Service issued a 20¢ Horatio Alger commemorative stamp on April 30, 1982, to mark the 150th anniversary of Alger’s birth (Scott 2010). The stamp design is based on an illustration for Alger’s Ragged Dick series and shows (from left to right) Ben the luggage boy; Ragged Dick, a bootblack; newsboy Rufus, known as “Rough and Ready”; and Mark the match boy.