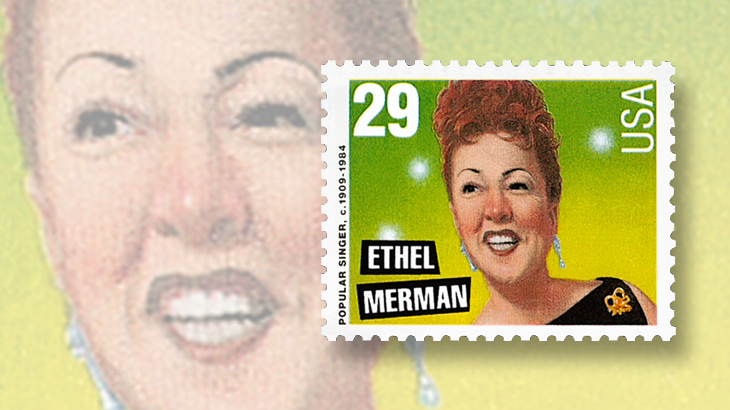 In 1999, popular singer Ethel Merman was honored on a 29¢ stamp in the American Music series.

After her high school graduation she worked as a secretary, but she also sang at nightclubs and private parties. She was discovered singing at a Brooklyn theater, won an audition with George Gershwin, and was singing on Broadway in Girl Crazy at age 21, wowing the audience with her rendition of I Got Rhythm.

She starred in more than a dozen musicals, including Anything Goes in 1934, Annie Get Your Gun in 1946, and Gypsy in 1959. Her powerful vocals made hits of songs such as Cole Porter’s I Get a Kick Out of You and You’re the Top, and Irving Berlin’s There’s No Business Like Show Business, which became her theme song.

Merman also appeared in more than a dozen films, including Anything Goes with Bing Crosby in 1936, and Call Me Madam in 1953, for which she won a Golden Globe Award.

She also won four Tony Awards, among them a special Tony in 1972 for her lifetime of achievement.

Ethel Merman was married four times and had two children: a daughter and a son. Merman died in 1984 and was honored on a 29¢ commemorative stamp issued Sept. 1, 1994, in the American Music series (Scott 2853).