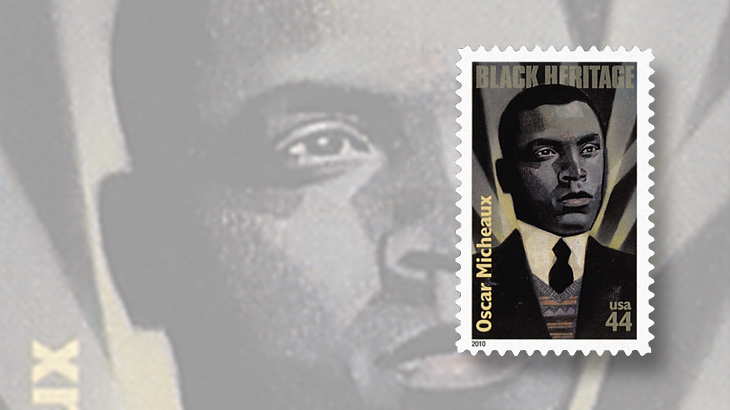 Filmmaker Oscar Micheaux was commemorated on a 44¢ Black Heritage series stamp in 2010.

The 2010 issue in the United States Black Heritage commemorative series honored filmmaker Oscar Micheaux, who was born Jan. 2, 1884, outside Metropolis, Ill., where he grew up and attended school.

Micheaux left Metropolis for Chicago, rooming with his older brother and eventually landing a job as a Pullman porter after struggling in a stockyard job and establishing his own shoeshine business.

Saving enough money to buy some land, Micheaux obtained a homestead in South Dakota and ran a farm. He later fictionalized his homesteading experiences in one of several books he wrote and published during his lifetime.

He established his own film and publishing company, and filmed his first movie, The Homesteader, in 1919. Micheaux was the first black American to create a significant feature film, which he had written, produced and directed.

With black actors featured in his films, Micheaux often tackled themes of race relations and social injustice. Though some of his films have survived, many have not. His last movie, The Betrayal, was released in 1948.

When the 44¢ stamp honoring him was issued June 22, 2010 (Scott 4464), the reverse side of the stamp liner included this inscription: “Pioneering filmmaker Oscar Micheaux (1884-1951) wrote, directed and produced more than 40 movies during the first half of the 20th century, when African-American filmmakers were extremely rare and support for their work was scarce. His entrepreneurial spirit and independent vision continue to inspire new generation of filmmakers and artists.”