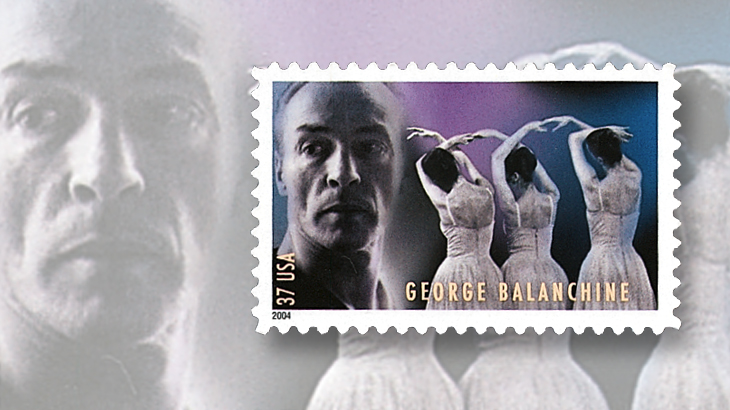 George Balanchine was honored on a 37¢ stamp in the American Choreographers set issued May 4, 2004.

The 2004 American Choreographers set of four stamps is one of several sets issued by the United States Postal Service paying tribute to the art of dance.

Among the four artists commemorated in this set is George Balanchine, who was born Georgi Melitonovich Balanchivadze on Jan. 22, 1904, in St. Petersburg, Russia. He studied at the Imperial Ballet School in St. Petersburg and at the Petrograd Conservatory of Music.

As a member of a touring troupe of the state ballet touring Europe in 1924, Balanchine chose not to return to the Soviet Union. A knee injury in early 1927 limited his dancing, and he focused his energies on choreographing ballets in Europe before moving to the United States in 1933, and becoming a U.S. citizen in 1939.

His work in New York led to the formation of the New York City Ballet in 1948, with Balanchine as artistic director. Because of his extensive and influential body of work, and his efforts to form the New York company, Balanchine has been referred to as the father of American ballet.