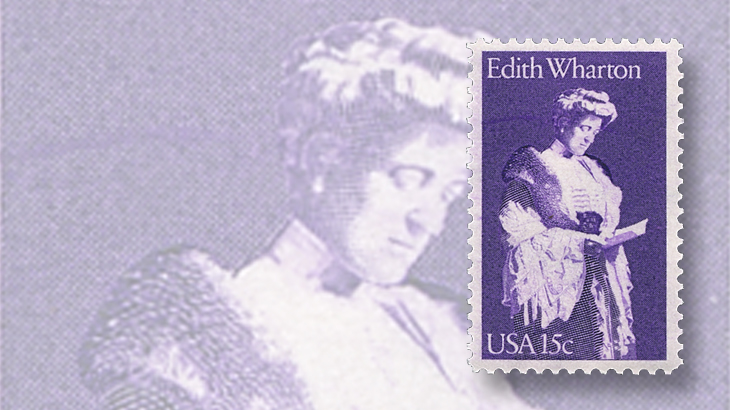 American author Edith Wharton was born into a wealthy family in New York City on Jan. 23, 1862. Her society background would provide the elegant settings for many of her published works.

A voracious reader and an avid student, she developed an early interest in writing and found some initial success with her translation of a German poem, and the publication of her own poetry in Atlantic Monthly.

She married at age 23 and continued writing, though she ended her efforts to seek publication until 1902, when she was 40 years old.

She also wrote numerous short stories and essays about travel. Her autobiography, A Backward Glance, was published in 1934.

Before the 15¢ Edith Wharton commemorative was issued on Sept. 5, 1980 (Scott 1832), the United States Postal Service wrote, “Her fiction was marked by its concern for form and the moral significance of subject and treatment and by the irony with which it responded to every symptom of social pretentiousness and stupidity.”

The stamp is the second issue in the U.S. Literary Arts commemorative series.