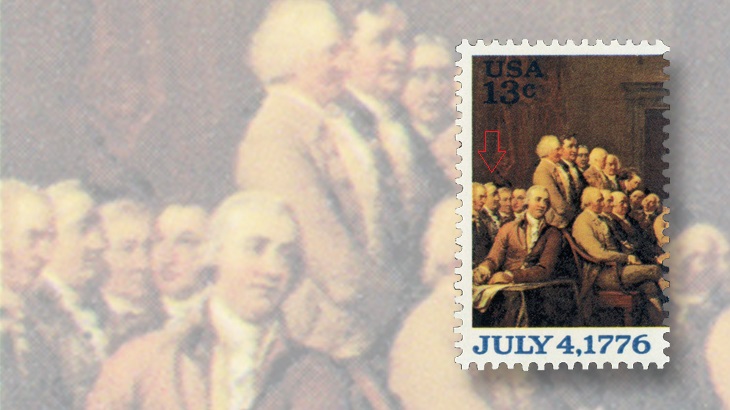 William Whipple Jr. is seated second from left on this 13¢ stamp issued July 4, 1976, to commemorate the Declaration of Independence.

A signer of the Declaration of Independence, William Whipple Jr. was born Jan. 25, 1731, in Kittery, Maine. He worked aboard a merchant vessel for his father, a sea captain, and became the successful captain of his own ship by age 21.

With his accumulated wealth, Whipple established himself as a businessman in Portsmouth, N.H., married his cousin Catherine, and was appointed to the Continental Congress in 1776, where he voted for independence from Great Britain, and signed the Declaration of Independence in August.

Whipple became a general in the New Hampshire militia and fought with the army of General Horatio Gates and other field commanders at the 1777 Battle of Saratoga, where British General Burgoyne was defeated.

In John Trumbull’s 1821 oil painting Surrender of General Burgoyne, Whipple is standing fifth from left, and therefore appears as a minute figure in the vignette of the $1 blue engraved stamp issued May 5, 1994 (Scott 2590).

Whipple was also depicted in Trumbull’s 1817-19 oil painting Declaration of Independence, which presents the scene of the Declaration draft being presented to Congress. In that painting, Whipple is the second delegate from the left edge, and is seen fairly easily on the first of the 1976 quartet of 13¢ stamps that make up the complete painting (Scott 1691).