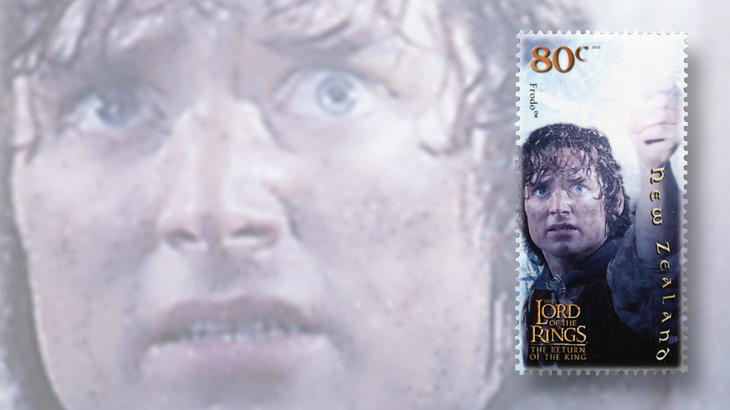 American-born actor Elijah Wood is pictured on an 80¢ stamp issued by New Zealand in 2003.

American citizens aren’t often pictured on regularly issued postage stamps during their lifetimes, but living film stars have shown up on stamps issued by the United States and other countries.

Wood, who was born Jan. 28, 1981, in Cedar Rapids, Iowa, is the actor who starred as Frodo Baggins in the three films of The Lord of the Rings trilogy: The Fellowship of the Ring (2001), The Two Towers (2002), and The Return of the King (2003). The New Zealand stamps commemorate the fact that these features were filmed primarily in that country.

Wood’s first feature film appearance was a small role in Back to the Future Part II (1989), followed by a bigger part in the Barry Levinson drama Avalon (1990).

He was also in Deep Impact (1998), Eternal Sunshine of the Spotless Mind (2004), and several other films, including voice work and a revisiting of the role of Frodo with a brief appearance in The Hobbit: An Unexpected Journey (2012).